My obsession with butterflies and moths has grown over the past few months. It began out of a need to identify and showcase the caterpillars that had invaded my community garden in Harlem and to pair them with their adult butterfly or moth stage. I also wanted other gardeners to understand the reasons why I grew particular 'weedy' plants and did not share their habit of cutting back and clearing every plant in our winter clean-up sessions.

However, my fascination with butterflies and moths dates back to my early childhood when masses of Urania leilus moths floated on the air in search of food and breeding grounds. We called them 'police butterflies' for their black coloring with highlights of blue, green and white. As kids we often found hundreds of these day-flying moths along roads and sidewalks as many were damaged or perished during their migration across the Caribbean and South America. Sadly, the phenomenon has become much less common in recent years.

I've absorbed lepidoptera information and started a little painting project. Unlike the abstract paintings 'field paintings' of the past 2+ decades, I rekindled a practice from my childhood: an exercise in seeing and reproducing details. I studied my many photographs of butterflies and moths and also looked at tons of images online. I wanted to give each painting a level of realism and render the subjects with their approximate wingspans and each in a size relative to other species. After a few hours of painting I found myself enjoying the focus on symmetry and detail. Now, a few months later, I have amassed a small collection of paintings.

You can find various versions of these paintings on Etsy under the shop name NaturalArtScapes. 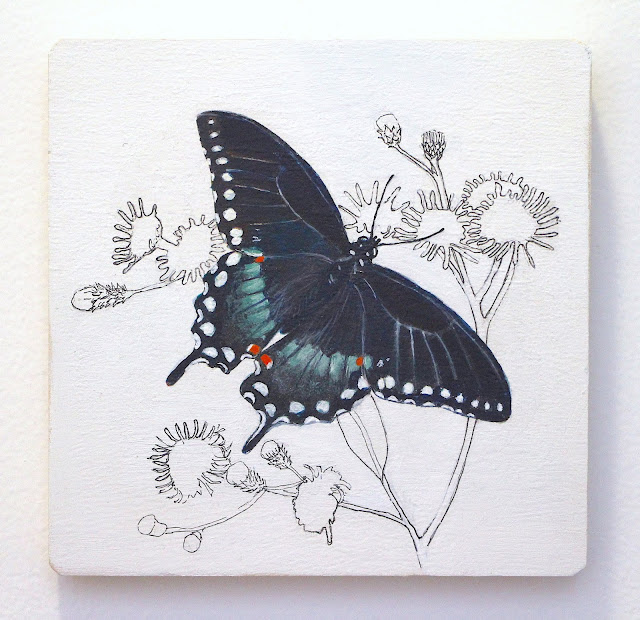 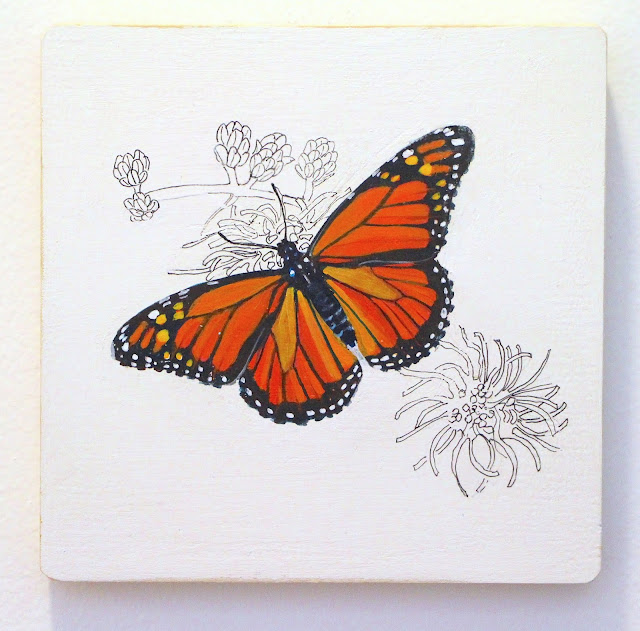 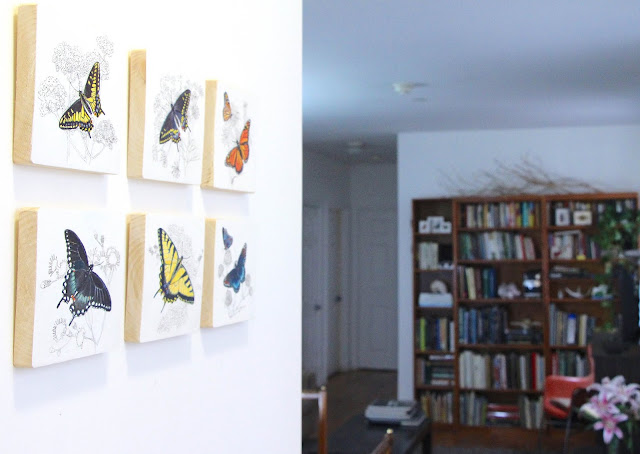 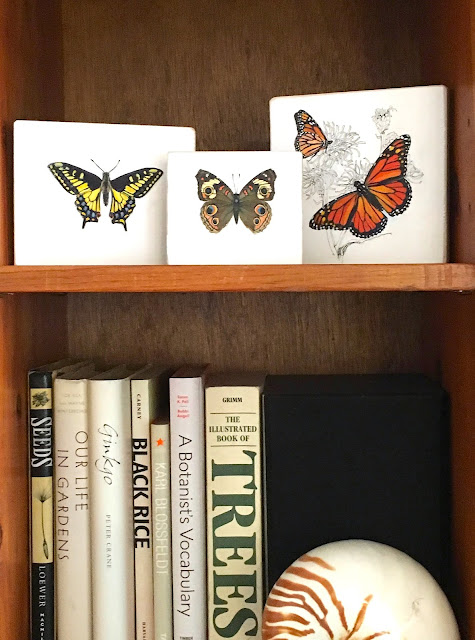 These small paintings were made with acrylic and permanent  ink  on wood. They are meant to free stand or can be easily hung. 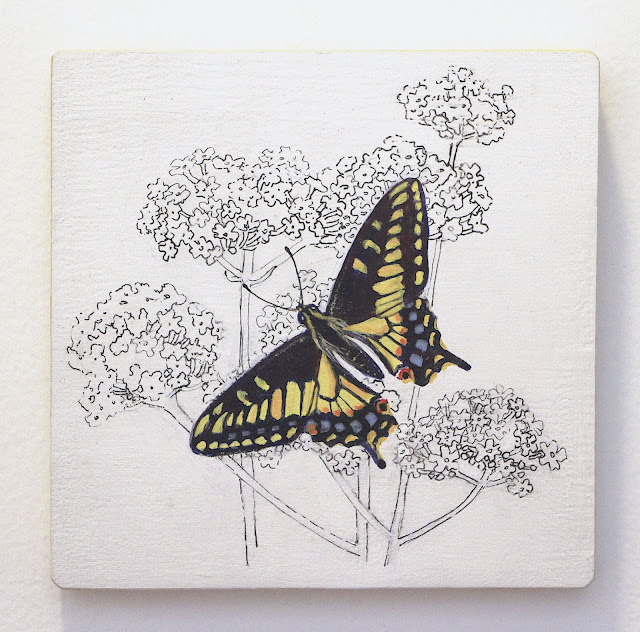 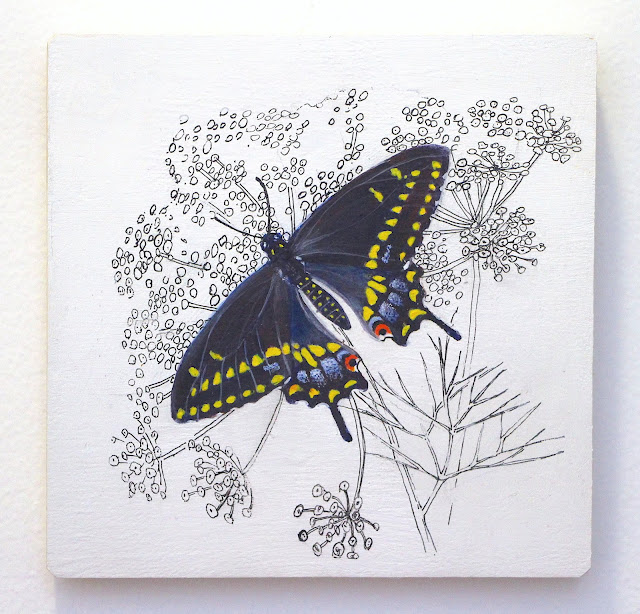 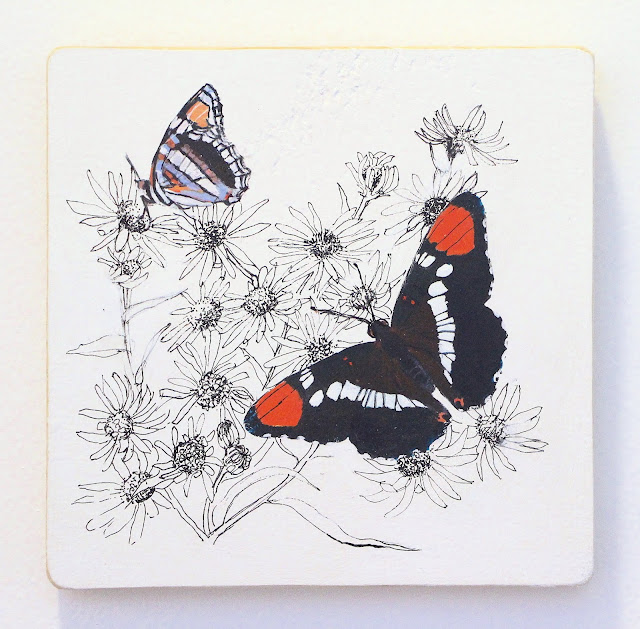 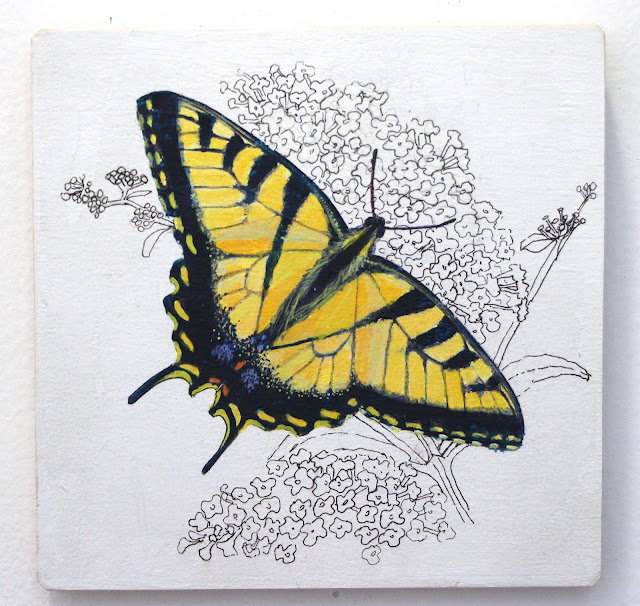 
This swallowtail is depicted on Buddleia davidii, a non-native species. Buddleia is considered an invasive weed by some gardeners. I've even heard it referred to as junk food for butterflies. I like it. I always have since I noticed it attracts hoards of butterflies. I am also fond of buddleia because I remember it growing as far south as in my mother's garden when I was a child in Trinidad. Very strange, knowing what I know now of this plant's growing range. But, I dare say that my mom was a miracle worker and grew all sorts of unusual plants. There is a Hydrangea macrophylla growing in her garden today.


Other butterflies depicted include a Sulfur, Cabbage White, Painted Lady and a Fritillary. My personal favorite is one of the least colorful and not a butterfly. It is the Sphinx Moth. I will soon add the Mourning Cloak butterfly and Dog Face to my collection.

These and other lovely visitors are regulars in my Harlem garden. I have created a haven for them with attractive plants for food and habitat. They add a bit of magic to the garden and to a home.
3 comments:
Email ThisBlogThis!Share to TwitterShare to FacebookShare to Pinterest

THE MOON IN BLOOM

“The moon has a face like the clock in the hall;

She shines on thieves on the garden wall,

On streets and fields and harbour quays,

And birdies asleep in the forks of the trees."

Mysterious, night-blooming vine in the morning glory family, Ipomea alba was a highlight among tomatoes, butternut squash, peppers and herbs in my little vegetable garden in Harlem. I grew a few plants from seeds collected the previous fall and last summer I was rewarded with an abundance of blossoms. Here are a few more reasons to love the moon. 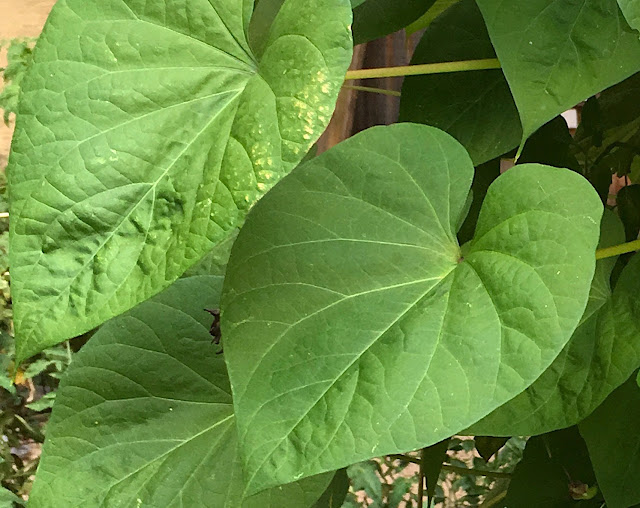 Large, medium green heart-shaped leaves soak up the sun's energy to prepare for stages to come. 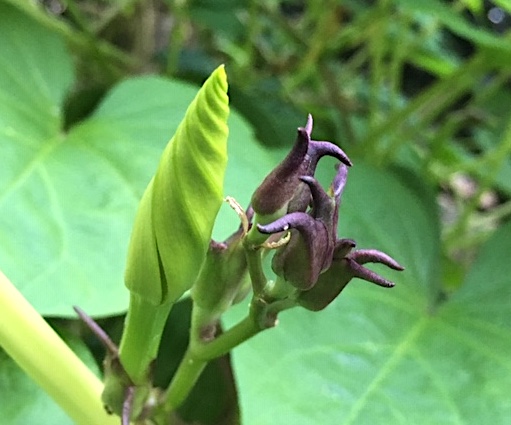 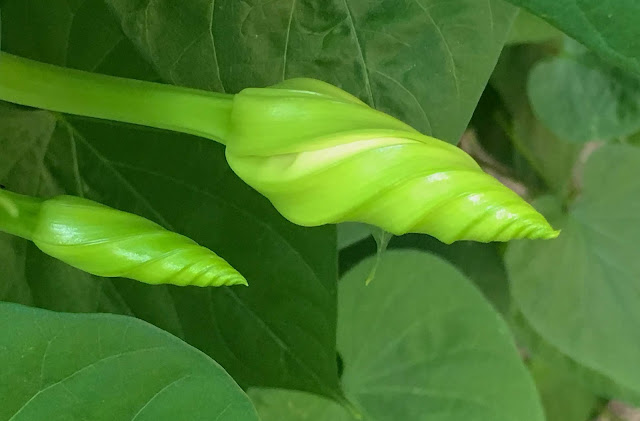 ENJOY THE JOURNEY THERE. 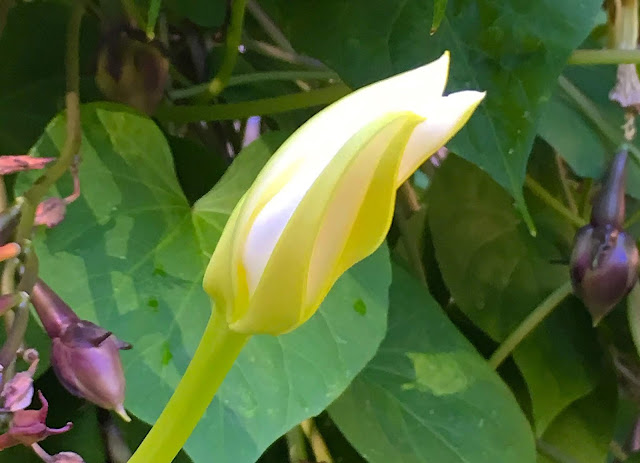 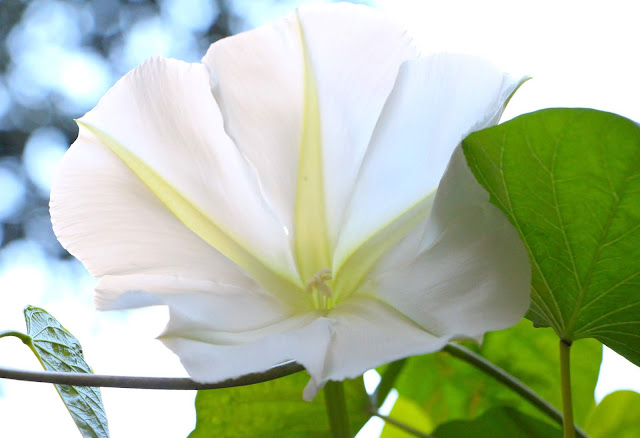 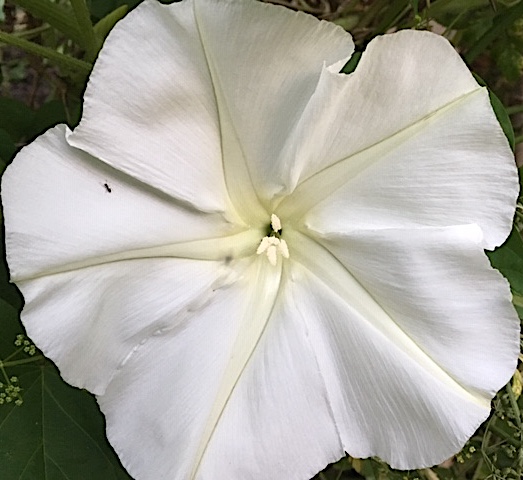 #3. WORTH THE WAIT FOR BEAUTY

'Heavenly' is the word that best describes moonflower. The large tubular flowers can be 5"-6" in diameter. They are pure white with hints of green and subtle petal venation. 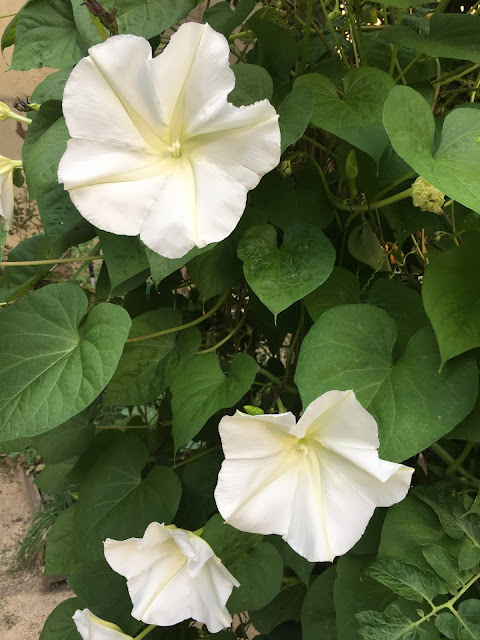 Soft evening perfume float on the wing as you walk along West 146 Street in Harlem. 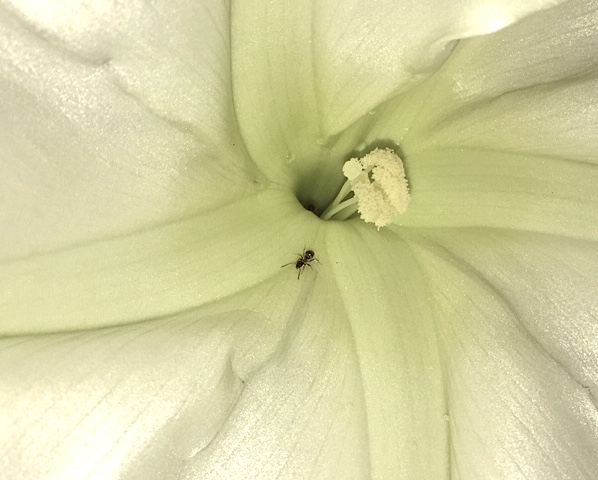 Moonflowers are intoxicating to insects that detect the strong fragrance from far away. Markings on the soft petals guide them towards the long tunnels that lead to nourishing nectar. I have not seen them but bats also love the scent of moonflower and are regular pollinators. 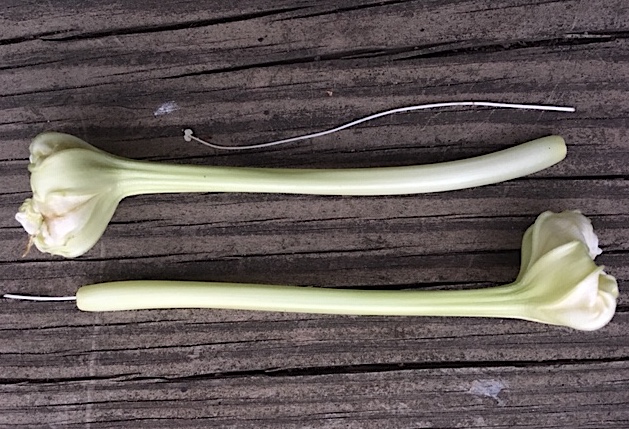 The extremely long proboscis of the sphinx moth is well suited for retrieving nectar which is located at the base of the long throats of moonflowers. The compatible morphology and physiology of both species ensures pollination. 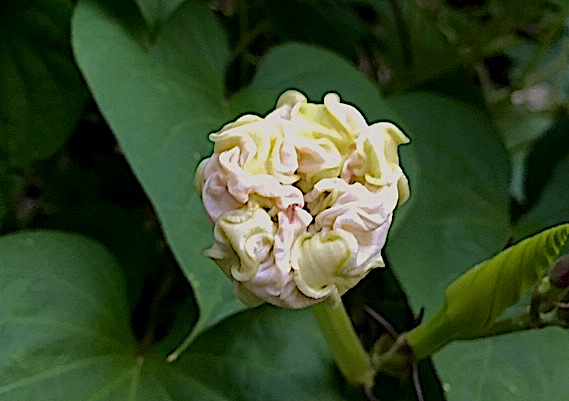 Flowers fade just after one night of radiance but still look lovely with pink flushes. 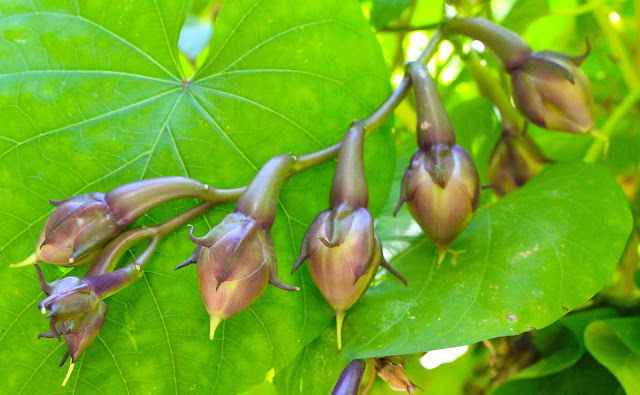 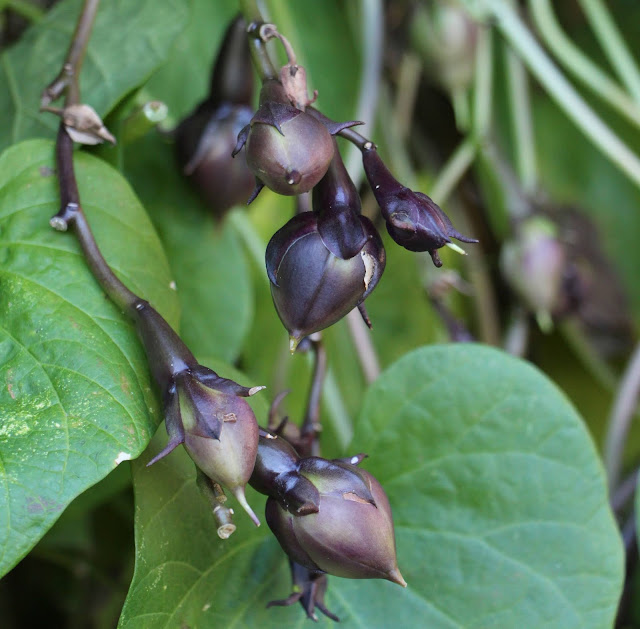 Beautiful beads of fruit appear and grow more bulbous as they mature. 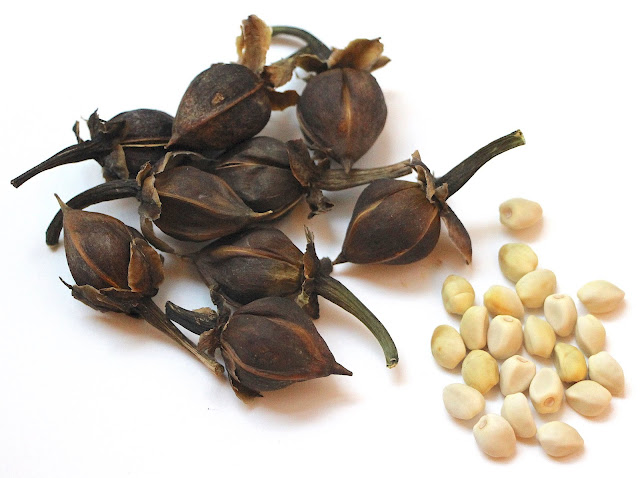 #9. CAPSULES THAT RATTLE WITH THE WIND

Delicate skins enclose pale creamy seeds that resemble pebbles and are almost as hard. Ideally pods should be left on the vine until seeds are mature and rattle when shaken. However, frost damages seeds. Be vigilant and harvest mature pods to dry indoors before frost hits. 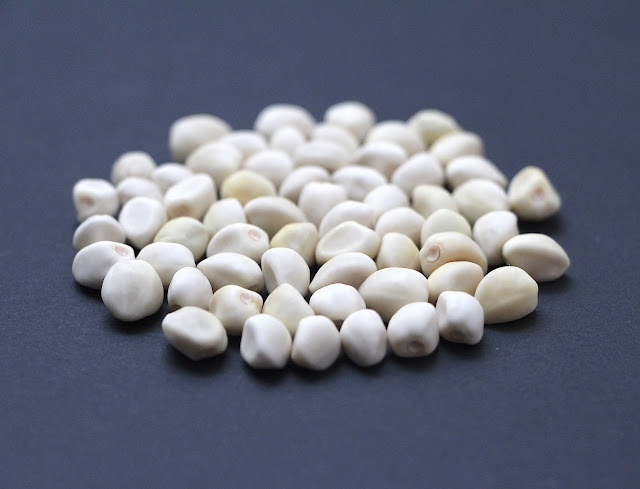 Each seed hold the sparks for a new pant. The temperatures and moisture of late Spring are perfectly combined to trigger the beginning of another purposeful, beautiful and abundant new life.

2 comments:
Email ThisBlogThis!Share to TwitterShare to FacebookShare to Pinterest

Flowering plants, whether herbaceous perennials, annuals, shrubs or trees, are delightful to the senses. We are drawn to their clusters or punctuations of color in delicate or robust shapes, varied textures and subtle or bold scents. Insects and birds are also drawn to flowering plants. Flowers provide nutritious and tasty nectar that insects and hummingbirds need for energy to fly, reproduce and ensure the health of future generations. Flowers often develop seeds that are a vital source of food for birds, humans and other animals.

The shape and color of a flower or inflorescence is usually an indicator of the type of insect that will be attracted to it. Bees love purple and yellow flowers, especially those of the Asteraceae family. Butterflies do not seem to be partial to flower colors. Hummingbirds are attracted to the color red and to any flower that is tubular. Of course the long beaks and tongues of hummingbirds and the flexible proboscis of butterflies and moths can reach into many tubular flowers that store nectar deep within. Lines, ridges and folds in flower petals help guide insects, like a plane on a runway, towards areas of the flowers that guarantee maximum connection with grains of pollen, that will be transported to other flowers, thereby increasing chances of pollination.

As insects, birds and other animals go about their business of survival, they ensure the survival of many other species including humans beings, by pollination. Food crops and other plants and trees often depend on the dispersal of seeds by birds, rodents and other creatures. Every nut-carrying frantic squirrel is adding to the survival of oak trees by the many acorns that are buried and are meant to be later dug up by absent-minded furry nuts. Every squawking blue jay that lands on a city windowsill with a beak full of nut seeds ensures the survival of many interconnected species.

Below is an assortment of plants that I've been growing in the Memorial Garden and other areas in the R.L Clinkscales Community Garden and Playground in Harlem. Please note that some of these images were found online. 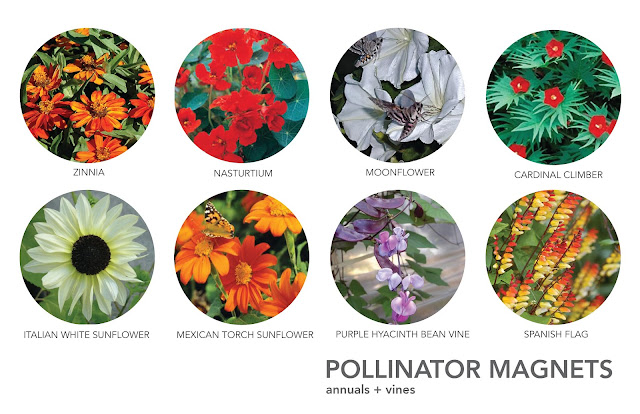 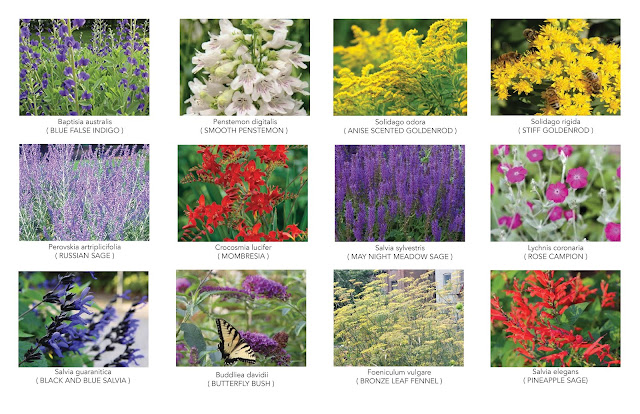 Buddleia davidii is a non-native and often considered an invasive shrub. Apparently butterflies do not distrust immigrants as they flock in multitudes to feed on the numerous tiny flowers on long panicles. I do not plan to exclude this plant from my garden palette anytime soon.

Foeniculum vulgare is another non-native and if left unchecked, it will seed prolifically. This short lived-perennial is also a host plant of black swallowtail caterpillars. Black swallowtails are fond of yellow-flowering umbiliferous plants. Fennel, dill, parsley, celery and Zizia aurea (Golden Alexander) are among their favorites. 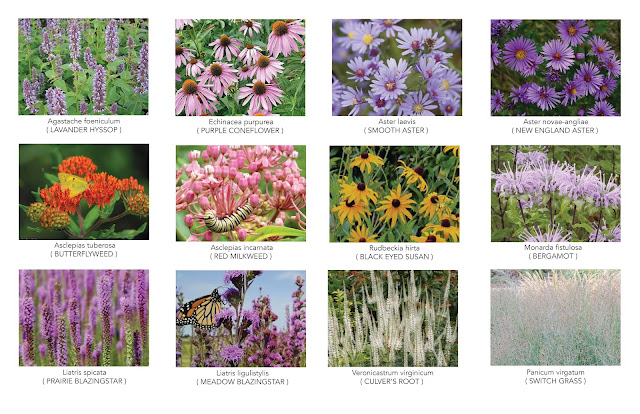 Towards the end of summer when many flowering plants are past their peak, pollinators are rewarded with a special treat of nectar and pollen from asters and goldenrods. These perennials are essential to the survival of many species that need energy to fuel their long migration to warmer lands. Monarchs gorge themselves at stop-over points along their way to Mexico. Like New Yorkers, other pollinators brace themselves for the winter cold. Most will not have access to food for months and honker down to avoid freezing winds. Asters and goldenrods provide food that will take sustain butterflies through the hibernation period.

Last November I was thrilled to find Salvia elegans (pineapple sage) with its bright red tubular flowers, still going strong in the Memorial Garden. I bet hummingbirds and other pollinators were equally delighted.
No comments:
Email ThisBlogThis!Share to TwitterShare to FacebookShare to Pinterest


Butterfly sightings elicit excited shrieks from delighted children and adults. It is a special treat to glimpse these beautiful winged insects in our urban landscapes, floating on the air or darting about. For some, seeing a butterfly is magical and a hint of the spiritual realm. For others it is a natural wonder and a reminder of the beauty and frailty of all life. Whatever you may feel when a butterfly captures your attention, note that you are experiencing a privilege.

Like bees, butterflies and moths are vital to our existence and like bees, their numbers are declining. Many are on the endangered species list and others are rapidly nearing extinction. Human intervention in the form of pesticides applications and soil and water pollution has weakened their bodies; their food supplies and habitats are razed for infrastructure and urban expansion. Unpredictable climate and increasing temperatures are also disrupting their food supplies and survival rates. Butterfly and moth populations in cities increase or decrease in direct proportion with pockets of greenery, trees, flowering plants, community gardens, parks, rooftop and green roof plantings and window boxes, all of which, provide food and habitat for these attractive winged insects. 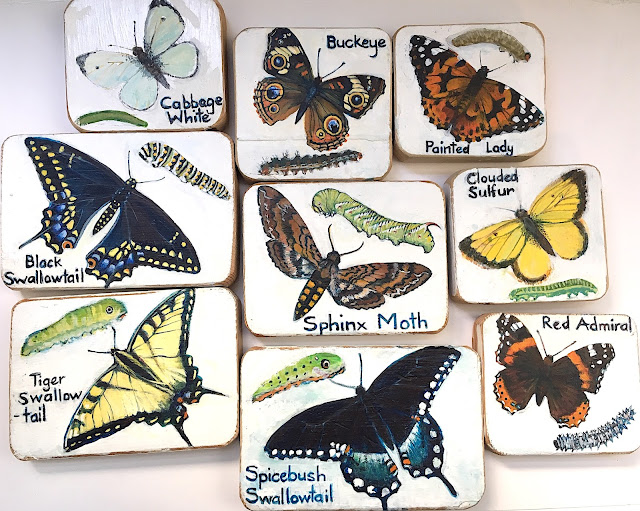 Still tweaking and adding more species to my collection.


Last winter I began a project to become better acquainted with common butterflies, moths and caterpillars that I spot on various landscapes and while gardening. My goal was to increase awareness and appreciation of these beautiful soft bodies and winged creatures, decrease caterpillar anxiety and create many ah-ha moments among my fellow community gardeners. I was also hoping to inspire curiosity among ­­­­­parents and children in the adjoining playground and neighborhood of Harlem. These durable hand-painted signs were to be hoisted on flexible bamboo rods and placed in various parts of the garden.